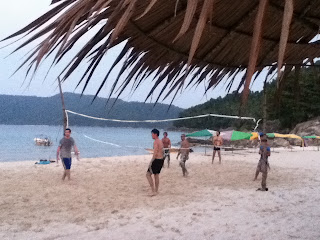 After Hari Raya all the locals advised us to go to the nearby perenthian islands, an hour off the coast by bone-jarring speedboat.

We found a cheap cabin for 30 ringit (about €8) and after volleyball laid on the beach for three days. Which wasn't as nice as it sounds, as we were both sick from the heat. On the last day we managed snorkelling and were glad we came. The coral was teeming with life and we were surrounded by fish.

After the island we cycled north back to Kota bhura. Then another day to just near the thai border. We almost made it but thunderstorm struck. We have a small window of riding, as we can only start at 4pm because it's too unbearably hot, and then thunderstorms kick in around 6. In the morning it's boiling by 8.

Across the border next day we got the train north to better countryside and cooler weather. We hoped.